According to the urgent policy of the government to develop the national fuel transportation of the year 1988, so Bangkok Aviation Fuel Service Public Co., Ltd. (BAFS), is part of working committee to consider and to propose the policy of national fuel transportation at that time, also being the storage provider including servicing fuel to airlines at Donmuang Airport. The company has encountered with the traffic congestion situations by trucks that have been the barriers for fuel transportation from original depots in Central Bangkok area to depot at Donmuang airport. In addition, the environmental conditions with risks of accidents by cars effect to people and national security. Therefore, the Suitable Transportation System to replace trucks loading is Pipeline Transportation, by approval from the National Energy Policy Office Committee to form the fuel pipeline transportation project in order to solve such problems.

“Fuel Pipeline Transportation Limited (FPT)”, is therefore, established on 21 May 1991, according to the resolution of the cabinet. The Thai Airways International Public Company Limited, acts as the pivotal joint-ventures to operate fuel pipeline transportation route Bangchak-Donmuang-Bang Pa-In, including the constructing the terminal with the registered capital of 1,592 MB. The joint-ventured structures are state-enterprises, oil companies, financial institutions and other related groups. 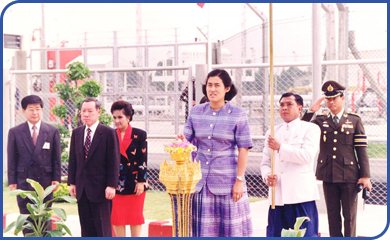